Over the years, our studio has, as part of our mission, started many bands. Most were youth or adult student bands, but some were Faculty or Teacher Bands. Recently, we were tasked with forming a band of experienced musicians to back an elite level teen singer. Where to begin?

Mercifully, the prime mover was not concerned with matching the age of the musicians with the age of the featured performer. This would have narrowed the talent pool considerably. In this case, the key consideration was the player’s ability to learn songs quickly.

The first round draft pick was a faculty alumnus, a guitarist with a sound engineering background, who works well in small groups. Following this, a current staff member with skills on guitar and bass was contracted. In round three, an adult drum student with decades of piano experience. And lastly, an accomplished teen drum student.

The ideal situation for the first, and possibly only, rehearsal is for the musicians to hit the ground running. After the songs were selected, sheet music / charts were arranged for distribution to the players. Listening to model recordings for chords and form was time well spent in the first rehearsal.

Managing rehearsal time is an art in itself. Without offending someone making an artistic contribution, the leader needs to keep the needle moving toward a prepared performance. Rehearsal time is your inventory – once it’s spent, it can’t be retrieved. Breaks also need to be managed.

It pays to organize who is contributing what. Drum set, PA, rehearsal space all need to be clearly assigned.

To keep this project on task, exemplar performances were recorded at the end of the first rehearsal and sent to DropBox so the musicians could review the form, tempo, keys, etc.

The band has not chosen a name yet, so the working title is “Rick Imus Music Studio Band.” Choosing a name too soon tends to lead to regrets. JS. 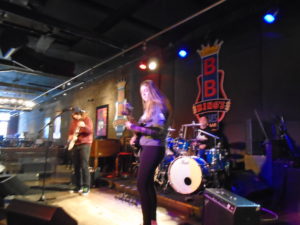