The best team in the world of baseball has booked a musical performance by Milton, Campbellville and Acton Studio Director Rick Imus.
Posted at May 27, 2020, in Uncategorized

Sporting the best record in the Korea Baseball Organization, the NC Dinos have booked an online musical performance by Studio Director Rick Imus.

The chord-melody style arrangement for solo electric guitar of the national anthem for South Korea will be displayed as a pre-recorded video on the Changwon NC Park stadium Center Field Board. The video was recorded in Milton, Ontario and displays ukuleles from the studio’s Road Trips to New York City, Chicago, Buffalo and Cleveland. “I offered to play live on Zoom, but this works out even better,” said the Humber College alumnus.

Professional baseball clubs in Korea are now playing their 144 game schedule to fanless stadiums. While the world’s other baseball leagues are planning their restarts, ESPN and TSN are broadcasting KBO Games of the Week with English speaking commentators calling the games from the United States. The broadcast schedule is announced one week at a time.

Imus’s rendition was selected for the Tuesday, June 2 game, which will start at 5:30AM Eastern Daylight Time. If the game is selected by ESPN, it may be re-broadcast at 2:00PM EDT.

The Korean anthem was a part of his three nation presentation that set a record in the Australian Baseball League in January. Imus performed 12 songs in a four game series when Geelong-Korea visited Auckland in New Zealand. The games were broadcast by Sky Sports TV. 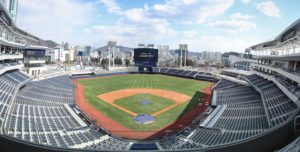