Studio Director Rick Imus performed Aegukga prior to today’s Korean Baseball League (KBO) game at Changwon NC Park in Busan. The performance, his trademark chord-melody solo for electric guitar, was displayed on the four-storey video board at the 22,000 seat stadium.

Though the stadium had no fans in attendance, the game was broadcast on North Korean TV and on the BBC Sport Radio’s Korean affiliate. Imus’s nationality was not mentioned. First place NC Dinos hosted the almost-worst SK Wyverns, so it lacked competitive appeal and was not selected for ESPN / TSN’s Game of the Day. The KBO is currently the top professional baseball league actively playing games.

Imus holds the Australian Baseball League record with 12 anthem performances in a four game series, set in Auckland this January. He did not travel to Korea, but took advantage of setting up an online video link. 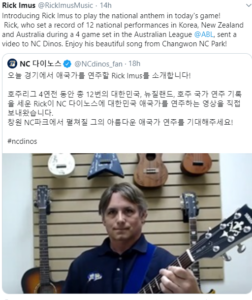