Bands from Rick Imus Music Studio in Milton and Campbellville will perform on the rooftop patio of  this Sunday night.

“We’re looking forward to having Rick’s Studio back at our restaurant,” said Events Co-ordinator Aruna Jones. The award-winning music program was most recently featured at Wild Wing in March, in preparation for their Seventh International Road Trip to Nashville and Muscle Shoals, Alabama.

“Playing indoors at WW is great, playing outdoors on the rooftop is even better,” said Studio Director Rick Imus. “Nobody will complain about carrying the drumset up the stairs because the atmosphere is awesome,” he continued. Imus likened the staircase to the legendary flight at Chess Records, 2120 S. Michigan Avenue in Chicago, where students recorded in 2016.

Regan Devlin leads the crew that will get the guitars, drums, and keyboards into place before show time. “The plan is to start early and be ready for active weather,” said the grade 11 Milton District High School student, who started as a co-op placement student at the studio. He was on the road trip to Nashville and Muscle Shoals, recording at FAME Studio.

SnapBacks, featuring drum solos and hits from the surf-rock repertoire will headline. Buffalo Band-Its will open the night. 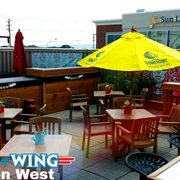